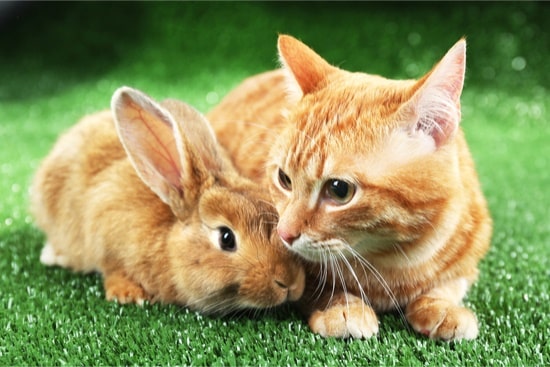 Cats and rabbits aren’t meant to live together. Cats are natural hunters, and rabbits are prey animals. This should be a big red flag for anyone who wants to get a pet.

That doesn’t mean that putting cats and rabbits together is doomed from the start to fail.

If you introduce a cat and a rabbit when they are young, there is a better chance that they will get along.

If two animals grow up together, they’ll forget about their differences and play together happily. When pets are older, they are less likely to accept each other for who they are.

Can Cats and Rabbits Live in the Same House?

Cats and bunnies can get along. They coexist peacefully. In some cases, they can become friends.

Cats and bunnies shouldn’t be left unattended. Even though they’ve bonded, they’re still animals ruled by instinct. A cat can instantly attack a rabbit.

That’s not to blame the cat for a potential incident. Rabbits are extremely dominant and hierarchal.

You’ll need regulations if a cat and rabbit live together. When both animals know their positions, they get along well.

How to Encourage Cats and Rabbits to Live Together

To keep your cat and rabbit happy, you’ll need to meet the needs of both pets. Cats and bunnies are similar in many respects.

Both species are territorial. Neither animal enjoys any change to its routine.

Perhaps most importantly, both become jealous if they feel they’re not the center of attention.

The critical steps to a harmonious household that contains cats and rabbits are as follows:

It’s easier if you bring a bunny and cat together when both animals are young. Both pets will be more adaptable in their early years. Equally, if they grow up together, neither will be able to appreciate life without the other.

Cats and rabbits are not natural bedfellows, but this doesn’t mean that they’re enemies. Many felines and bunnies find common ground in the home, under the right circumstances.

Naturally, it’s a relationship that you’ll need to manage carefully. These two animals are always at risk of throwing away a friendship in a moment.

Watch your cat and rabbit, and ensure that both pets feel equally loved and valued. That’s the key to a happy and harmonious dynamic. 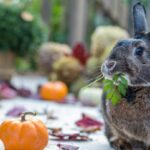 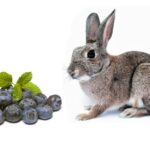 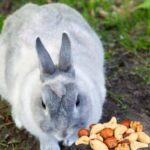 How to Care For Flemish Giant Rabbit 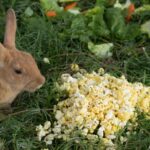 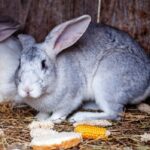