Many people who have never owned a guinea pig before are taken aback when they learn that the mere presence of their new furry family member can attract mice and even rats to the house or backyard.

It’s already challenging to deal with a mouse or rat infestation without worrying that your guinea pig is drawing them in like a magnet.

But do mice really keep coming into your house because of your guinea pigs?

Perhaps there’s something else going on that’s attracting these pests because you’ve noticed an increase in the number of mice and rats.

However, if their food and bedding are not properly stored, mice and other rodents may find their way into your home or backyard.

They can detect the scent of guinea pig food from a great distance.

Come on, let’s dig in and find out!

Are rats/mice dangerous to guinea pigs?

When rats get into your guinea pigs’ cage, they can cause serious harm. I’ve even heard of rat attacks on guinea pigs.

Rats provide a threat of disease transmission in addition to physical harm.

Salmonella, tularemia, hantavirus, and LCMV are all possible pathogens for your guinea pigs.

The infections can be spread in many different ways, including a rat bite, rat urine, rat droppings, and so on.

Your guinea pigs and you both are at risk from the viruses that rats transfer.

That’s why it’s smart to provide your guinea pigs plenty of protection against rodents.

If we want to keep rats at bay, we need to know what foods and other items serve as magnets for them.

What Attracts Rats in General?

Some guinea pig owners may mistake the sound of scurrying rats in the walls for a summons from their pet. While occasionally true, this is the exception.

It’s much more likely that the rats showed up at your house due to some other, unrelated issue.

You may be able to do something about some of these, while others may be beyond your ken.

Although there are many potential sources of rat attraction, we will focus on the three most common ones.

This is a guinea pig site, not a rat one, after all.

If it’s freezing outside and toasty inside, any animal would appreciate the invitation.

Rats, however, are so little that they can easily find a way inside.

The smell of an unsealed bag of chips in the kitchen, an open jar of cookies on the kitchen counter, or a half-eaten sandwich on the office desk could attract a pack of rats.

However, this is not the case for smaller food products.

To a rat, even a crumb of food that has fallen to the bottom of a guinea pig’s cage is an enticing invitation.

The guinea pig’s excrement shows that it has not been digested nearly as thoroughly as that of other animals.

Because of this, it still contains some of the vitamins and nutrients that the rats could benefit from.

It’s not a pleasant thought, but it’s the truth.

Therefore, having a lot of cavy feces lying around their cage may invite rats to come in for a free meal.

Do Guinea Pigs Attract Mice to Your Home?

It’s crucial to recognize right off the get that guinea pigs can bring mice into your home, even if it isn’t the guinea pigs’ fault.

All rodents can benefit from the same cages, bedding, and food that your guinea pig requires. That also includes rodents like mice and rats.

Anything that your guinea pig enjoys as a snug spot or tasty treat is likely to be a magnet for mice, luring them in from all over the house.

Are Mice Dangerous when Around Guinea Pigs?

Even while the guinea pigs’ natural environment will undoubtedly entice mice, you must exercise extreme caution to prevent the rodents from harming your fuzzy little family members.

Mice and rats are extremely territorial and incredibly violent, and they will not hesitate to defend their food and shelter against guinea pigs that are twice or three times their size.

They will constantly try to find a way into your guinea pig’s habitat, causing stress and possibly even death.

Mice, on the other hand, can spread a wide variety of diseases to your guinea pig.

Mice can transmit a wide variety of infectious diseases to your guinea pig, including salmonella, tularemia, lymphocytic choriomeningitis, and leptospirosis.

The worst part is that the mice don’t even need to come into touch with your guinea pig for them to contract these terrible infections.

The animals can easily spread the disease through their feces and urine.

If you detect mice or rats in the house after bringing your guinea pig home, you must take immediate action.

Why Do Guinea Pigs Attract Rats?

To reiterate, guinea pigs do not naturally attract rats. But the place they call home might affect them greatly.

Some of the most common ways that rats find their way to guinea pigs are described here.

Your guinea pigs’ leftovers are a major magnet for rats.

Hay is the least concerning food item, hence it is not included in the food here.

Vegetables, fruits, pellets, and treats are examples of additional food items that can be significant.

The overfeeding of guinea pigs is a common mistake made by pet owners for a variety of reasons, including a lack of knowledge or time.

Bugs and rodents will be drawn to your guinea pig cage if you leave a lot of food in there for them.

Rats are drawn to your guinea pigs for a number of reasons, one of which is the poor living conditions in which they are kept.

You should know by now that guinea pigs can be quite the slobbery little creatures.

They will eat all their food at once and then poop all over their cage.

Because rats prefer to forage in the trash and unclean areas, this can develop into a serious infestation.

They look for safe sites to nest and raise their young.

It’s true that guinea pig feces can entice rodents, but that doesn’t make it any less unpleasant.

Mice and rats are drawn to almost any form of food, including that which has not been fully digested.

Rats are likely to be attracted to your guinea pigs if their enclosure has accumulated a lot of feces.

When water is limited, as it often does during the hot summer months, rodents may come to your guinea pig’s cage to drink.

Though this does happen occasionally, most of the time they are actually hunting for food.

However, they might come for the water in your guinea pig’s cage if they discover it is a trustworthy source.

Since rats are warm-blooded, they do require a toasty environment in which to set up their nests.

If you live in a cold climate, your guinea pig’s warm, well-insulated cage could be an attractive nesting location for rats.

How Do I Get Rid Of Rats Around My Guinea Pigs?

We can swiftly resolve the rat problem now that you know the main causes of their presence around your guinea pigs.

If you have a rat problem, you can eliminate it by following these steps.

Get rid of spare food

As we’ve mentioned before, a rat colony can quickly grow in the presence of a constant supply of free food.

Now, there are just two steps left to take to resolve the problem:

Serve fruits and vegetables in modest portions multiple times daily rather than all at once.

In the event that food remains uneaten after a few hours, remove it from the enclosure.

By adhering to these guidelines, you can make sure that your guinea pigs finish their meal within a few hours, and that there is no stray food about to attract pests.

Use peppermint essential oil around your garden

If you’re looking for a do-it-yourself, all-natural solution to rat infestation, peppermint oil is a great choice. This is because the stench repels rats.

To prevent rats from getting to your guinea pigs, dilute the oil with water and spray it around the openings.

Keep in mind that guinea pigs, which have an acute sense of smell, can become unwell if exposed to essential oils.

Although the use of a rattrap may seem antiquated, it is actually quite effective in the modern world.

It is possible to utilize the rattraps to capture unattractive rodents and release them in a far area.

If you don’t want your hands soiled, it’s best to avoid traps that damage the rat as well as the human.

In addition, if the rats die in a hidden spot, the stench could spread throughout the house unless you find them and get rid of them.

Raising the enclosure doesn’t guarantee the safety or get rid of rats directly, but it does make it more difficult for them to get to the food by making them climb.

You may give a hutch that will serve as an enclosure some extra height by attaching legs to it.

By adding on some more grids, you can give your C&C cage a loft, giving it some much-needed vertical space.

To make it more difficult for the rats to access your guinea pigs, you may want to elevate their cage (if it is a midwest cage or something like that) off the ground. Differences Between Hamster vs Guinea Pig 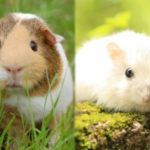 Everything About Himalayan Guinea Pig 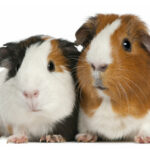