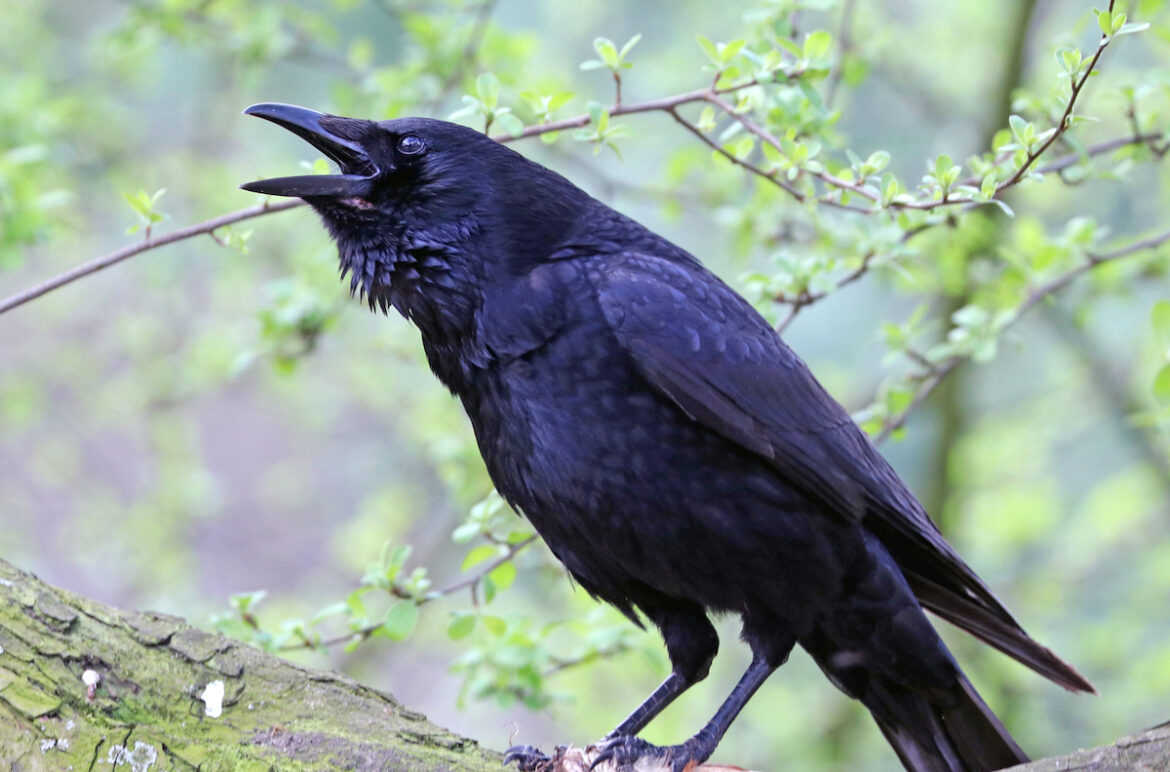 It’s fascinating to listen to birds attempt to imitate human speech. A small number of birds can actually hold a conversation.

Parrots are notable because of their near-perfect ability to imitate human speech.

Having read this, you may be wondering if crows really can mimic the sounds of a human’s voice like a parrot.

Using their syrinx, like parrots, crows can imitate and reproduce the speech of other birds.

They can successfully imitate human speech without resorting to mutilation, despite the fact that they are not constantly in close proximity to humans.

If crows can talk like parrots, and if so, how to train them to do so, is the topic of this article.

To further explore the significance of crows congregating near your home, here is another article for you to peruse. You are welcome to glance at it quickly.

Even though they are less likely to do so than parrots, crows are actually capable of speech.

It’s because they lack the tongue dexterity of parrots, which is essential for communicating.

It’s possible you’ll notice a big difference in their vocabulary and fluency because they aren’t as closely related to humans as parrots are.

Unlike parrots, crows aren’t comfortable striking up conversations with strangers, yet they do so around familiar humans.

And thus Puck, a cherry blue parakeet, holds the record for fastest word recognition in the world with 1,728 words.

As a result, crows are poorer communicators than parrots.

The crows can communicate with us. It’s not surprising that crows at a zoo or wildlife park would recognize visitors’ voices if they called out to them.

They quickly learn the word and use it whenever they please.

Crows, however, might not catch on to what they’re saying.

We already know that they use their syrinx—a vocal organ in birds often known as a voice box—to mimic human speech like parrots.

Will Splitting A Crow’s Tongue Allow It To Talk?

Even if you cut the crow’s tongue in half, it won’t start talking. There is no truth to that at all, and in fact, it’s an extremely falsehood.

Crows don’t need any external enhancements to communicate; their DNA already gives them that ability.

Squeezing its throat or severing its tongue won’t make it talk any more than it already would.

They can understand and speak English, but it’s not easy to get one to really speak it.

A crow’s likelihood of imitating human speech is entirely dependent on how often it hears a particular word or phrase and the crow’s age.

When compared to a crow that has been raised in captivity its entire life, an older crow that rarely interacts with humans is less likely to memorize and repeat a statement.

It should also be stressed that crows are unable to learn human language through more traditional means.

A “cause and effect” comprehension is possible, but connotation cannot be correctly identified.

A crow is unable to understand the meaning of words or the structure of sentences.

Instead, the emphasis should be on learning to associate particular noises with specific behaviors.

To clarify, let’s look at an example:

Crows can be trained to associate the phrase “chow time” with food. That sound is only a signal for food to them (think Pavlov).

The crow’s reaction to “time for chow” is unlikely to be the same if you switch the order of the words.

However intelligent crows may be, it would be pointless to try to teach them human language.

They can, however, pick up and use a limited vocabulary of words and phrases.

How Do Crows Talk?

Crows’ language differs greatly from that of humans.

Because of their syrinx, they are able to convincingly imitate spoken and sung phrases.

They take in information and attempt to reproduce it verbatim.

Crows are able to imitate other animals’ calls by using a wide variety of techniques.

The syrinx, commonly known as a voice box, is a specialized vocal organ used by crows for mimicking other sounds.

Crows can imitate human speech, but they don’t grasp what they’re doing.

Crows have a superior memory to other bird species, allowing them to learn new words and phrases at an accelerated rate that they can use to communicate.

Their intelligence outstrips that of any other bird, despite the fact that their heads are proportionally smaller than the rest of their bodies.

They have a wide range of pattern and tool recognition abilities.

A crow’s brain is made up of nuclei of neurons that work together to create a song.

Therefore, crows have the ability to imitate human speech and even construct complete phrases.

Why Have You Never Seen A Talking Crow?

Because, unlike parrots, crows don’t necessarily hang out with people all the time.

Also, these birds are rarely kept as pets. So it’s not always easy for them to pick up new words to mimic.

Parrots, on the other hand, are domesticated birds that can easily imitate human speech.

Crows, however, can pick up on and convincingly imitate human speech if given the opportunity.

Occasionally they can even mimic human speech almost as effectively as parrots.

If you locate a crow at a zoo or wildlife preserve, you should train it to say “hi,” “good morning,” and other common greetings.

How could I train a crow to speak?

You might be able to teach a crow to talk if you kept one as a pet or if one frequently visits your garden.

The crow will pick up the habit of mimicking your voice more quickly if you start out by repeating simple phrases to it over and over.

You may praise it when it tries extra hard and reward it when it says a particular word perfectly.

The earlier the training begins, the better, because the younger the student, the more likely they are to retain the material and the greater the likelihood that they will be able to learn to communicate.

Developing a solid rapport with the crow is essential.

When you take care of them and spend time with them, they’ll feel more comfortable opening up to you.

You won’t get very far in training the crow if it doesn’t trust you.

How Do You Teach A Crow To Talk?

In order to teach a crow to talk, it is best to start with the bird when it is young and provide it with a loving, stable environment.

If a crow is a regular visitor to your backyard, you can teach it to talk. Here are some easy steps you can take to teach a crow to converse.

The crow will learn to imitate your voice as you pronounce the words over and over.

The crow’s ability to imitate human speech and other sounds improves with practice.

Tip – 2: Say the Words with Enthusiasm

When you get the crow excited, it becomes more motivated to learn the words you’re teaching it.

Tip – 3: Give the Crow Rewards after Properly Saying a Word

When training a crow to mimic words, food is one of the most useful instruments you can use.

The crow can be motivated to learn the words by being rewarded for accurate imitations.

In cases where the crow makes a sincere effort, it should be commended.

Young crows are better at word mimicry than older crows, according to the research.

Young crows have a lot less work to do than older crows.

You should start with a young bird if you want to train it to talk.

Tip – 5: Build Trust with the Crow

Developing a crow’s trust is crucial if you want to train it to talk.

Allow the crow a lot of one-on-one time and it will grow attached to you.

It will be impossible to teach the crow anything if it doesn’t trust you.

Can All Crows Talk and Mimic?

Even if they have the mental capacity and ability to replicate human speech and noises, crows cannot all converse like parrots.

Due to the fact that some crows may be too timid to voice their opinions, this is the case.

They have no interest in expressing themselves in this fashion.

Why Do Crows Thrive In The Human Environment?

You need to know what makes a crow tick to appreciate why they do so well in human settlements.

Crows are true omnivores, devouring virtually any food source presented to them.

Berries, veggies, bugs, fish, and even small mammals are all fair game for them.

However, they are just as likely to rummage through trash cans in search of human food or even partially digested carrion.

In nutshell, crows never go hungry around people since there is always plenty to eat.

In addition, crows excel in recognizing human faces and making both positive and negative associations.

Even more importantly, they work together on everything.

They travel in groups and, thanks to their excellent communication skills, are always happy to pass on the news to their neighbors.

If a human mistakenly kills a crow, they will have to face the wrath of the whole crow population, not just those in the immediate region.

Why Do People Think Crows Are Evil?

The nasty reputation of ravens and crows is a common theme in numerous folktales.

However, that’s only because nosy humans haven’t learned to read the subtle signs of these reserved but perceptive beings.

Crows and ravens are both large, dark birds. Because they are so loud and clever, they often entertain themselves by pranking other animals.

Crows are omnivores, meaning that in addition to other animals and insects, they will also consume smaller birds, mammals, and carrion.

It’s little surprise that writers and poets have recast them as trickster gods and morbid symbols over the centuries. Let me direct my gaze on you, Mr. Edgar Allan Poe.

However, in certain cultures, a raven is seen as a prophetic figure who may reveal hidden truths.

Ravens serve as psychopomps in a number of traditional tales.

These intermediary entities, known as psychopomps, bridge the gap between the living and the dead.

As a result of their role as carrion birds, crows and ravens are sometimes viewed as intermediaries or messengers between the living and the dead.